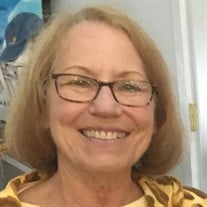 Becky (Warton) Bergevin Becky, 72 years old of Corvallis, Oregon, peacefully went to her heavenly Father on March 14, 2021. Born in the Long Beach Naval Hospital, she was the second daughter of Lt. Commander John F. Warton and Estelle M. Calienni. Becky’s early childhood was spent as a “navy brat” with stops in Guam, Monterey, Carmel, Hawaii and Orange. She graduated from Mater Dei in 1966 where she met her future husband Dave. They married in 1968 and set up households in Irvine and then Orange. Daughter Jo and son Tim soon followed. Becky and Dave moved up and down the West Coast with stops in Orange County (twice), Portland, San Jose, Carlsbad, and Phoenix before settling in downtown Huntington Beach where they spent 12 years before deciding to return to the northwest. Becky graduated from the University of California Irvine in 1991 and held many technical positions in a long career that spanned multiple industries including school districts, oil and chemical, banking and semiconductors. Her most senior position was as Global Quality Systems Manager for the Analog Division of National Semiconductor where she traveled the globe from Maine to Europe to Malaysia and Singapore. As a multi-talented craftsperson, Becky was a master at a variety of crafts including ceramics, tole painting, watercolors, sewing, knitting and crocheting. One of her crowning achievements was a first place Blue Ribbon at the Oregon State Fair for a ceramic cookie jar. Becky was preceded in death by her parents. She is survived by her husband of 52 years, Dave; daughter Jo of Corvallis; son Tim of Boston; siblings Sandy, John, Mikie and Patrick; five grandchildren and a multitude of cousins, nieces and nephews. St. Mary’s Cemetery in Corvallis is Becky’s final resting place. In lieu of flowers, please donate to the Alzheimer’s Association at alz.org.

The family of Elizabeth Ann Bergevin created this Life Tributes page to make it easy to share your memories.