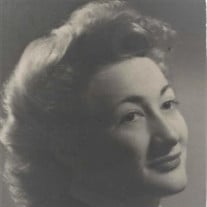 April 16, 1932 — March 7, 2020 Edna Pauline (Phillips) Lanman of Albany was born April 16, 1923 in Freeport, Illinois to Frank and Bessie Phillips, the second youngest of eight children. When she was seven years old, the family moved from Freeport to Raymondville, Texas in the Rio Grande Valley. After graduating from high school, she attended Texas State College for Women (TSCW) in 1941. A member of the "greatest generation" in 1943, she was passing a recruiting office in Dallas and on a whim enlisted in the Women’s Auxiliary Army Corps (later the Women’s Army Corps). Only 20 years old, she had to lie about her age since 21 was the minimum age for women who wanted to serve. After radio school in Pennsylvania she volunteered for duty overseas and was sent first to Algiers in North Africa and later Caserta, Italy where she was on staff at the Allied Forces Headquarters. During an R&R break on the Isle of Capri she met a tall, dark and handsome soldier named Tom Lanman. Returning home after the war she reentered TSCW. In 1948, Tom persuaded her to join him in Seattle, Washington and they were married at Fort Lawton. The first years of their marriage were spent in Washington and Oregon followed by two years in Tokyo, Japan, where Tom served during the Korean War. Later they lived on the East Coast in Virginia, Maryland and Pennsylvania. Edna became a mother late in life (before it was fashionable to do so), giving birth to daughter Lisa in 1961 and son Marc the next year. When Tom retired from government service they moved to the southern Oregon community of Tiller. While living there Edna sold Avon in order to get to know people and played piano in the small country church they attended. Later they moved to the mid-valley and enjoyed various volunteer activities. In spite of losing the index finger on her right hand in an accident as a toddler, Edna learned to type over 80 words per minute while in the Army and was also a self-taught pianist, playing the piano many years in church and then for the enjoyment of her fellow residents at Quail Run Assisted Living during the later years of her life. Tom and Edna were named the Veterans of the Year for the 2011 Albany Veterans Day Parade. They enjoyed 67 years of marriage before Tom passed away in 2015. She was the last surviving member of her family's generation, being preceded in death by her parents; her seven siblings and all her many first cousins. She is survived by daughter Lisa (Dale) Burrows of Albany; son Marc (Deanna) Lanman of Springfield; five granddaughters; and four great-grandchildren. Edna passed away March 7, 2020 in Albany. At her request there will be no service. Memorials may be made to the Shiners Hospitals for Children in Portland. After cremation her ashes will be interred in the spot saved for her next to her husband at the Willamette National Cemetery columbarium in Portland.

The family of Edna Pauline Lanman created this Life Tributes page to make it easy to share your memories.