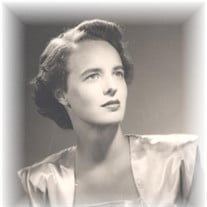 Our beloved Donna departed this world on August 20, 2020, peacefully at home with family by her side. Donna was born in Eugene, Oregon, on November 16, 1928, the third daughter of Clarence Freeman Hyde and Nelle Florene (Beery) Hyde. The family lived in several homes in Eugene as guided by Clarence’s real estate business acumen. During the summers, the family went to the Oregon beach for several weeks. Later, they went “Up Camp” to a cabin on Fall Creek about 35 miles from Eugene. There was no electricity or running water and each weekend Clarence would bring 50 pounds of ice for the icebox. Nelle baked bread in the wood stove and the girls picked blackberries to make jam. Clarence tied a rope across the creek below the swimming hole in case the girls began to drift away. Donna had fun growing up with her sisters, even during the Depression. As children The Hyde Sisters performed gymnastics and tumbling routines at many venues including MacArthur Court at halftime of basketball games. The family attended the dedication of Bonneville Dam in 1937 and Donna had her picture on the front page of the newspaper when a photographer captured her as she ran up to the motorcade to shake hands with President Roosevelt! The family enjoyed travel, and when business kept Clarence at home, the four strong women traveled without him, including a summer in Mexico in 1940. During WWII, they picked beans, pulled beets, and harvested other crops “for the war effort” and to earn a little money. At age 15, Nelle got her a job at Miller’s Department Store for after school and Saturdays. She did any job the manager told her to do, from sales in any department to gift wrapping, cashiering, running the telephone switchboard or the elevator. She worked hard and learned a lot, but the manager liked to refer to her as “the brat.” Her father wanted her to be a doctor, but she wanted to be a veterinarian. Donna graduated from Eugene High School in 1946 and married Dennis Carroll “Sandy” Warren in 1949. Sandy died tragically in a plane crash in the Willamette National Forest (near Carpenter Mountain) on June 25, 1951. Donna continued her travel and education, attending universities in Wisconsin, North Carolina, and Virginia. Donna married B. Linn Soule in 1955 and the family grew with Steven James (1956), and Matthew Dean (1957), in Anchorage, Alaska before it became the 49th state. Following an assignment in Germany, the family lived on Long Island New York adding Charles David (1958). The frosting on the cake was Linnelle (1961) in Dayton, Ohio. The family also lived in East Lansing, Michigan before settling in Corvallis, Oregon in 1967. Donna married Ray Franklin Brokken in 1973 and Donna was proud to be the stepmother of David, Shanna, and Karen. Donna donated her time to many charitable causes and was honored with a 10-gallon blood donation pin. Donna was the first woman to be appointed to the Corvallis Planning Commission. Ray and Donna lived in Africa (Lesotho, Swaziland, and Ethiopia) most of 1984-1993 where Ray had various assignments researching, teaching, and mentoring graduate students in agricultural economics. Donna stayed involved with many civic groups and charitable organizations during her decade in Africa. She arranged the donation of thousands of pairs of shoes and 40 years later, the brat’s nickname had become MME WA MOSA (in Sesotho) or “Mother of Kindness.” Ray and Donna both enjoyed playing bridge and following retirement had ample time to observe nature from their patio. Donna, eternally curious, was a voracious reader of non-fiction and read the biographies of all the US Presidents and First Ladies. She loved animals, none more than her precious recue dog Gleek. She wanted to be remembered as both frugal and generous, but in practice this meant personally frugal and generous to others. This followed from the early teaching of her mother, “Use it up. Wear it out. Make it do or do without.” Her father taught her to earn money, save money, use money, and give it charitably. Like her father, she valued education and travel as education. She was an avid collector and family historian and hoped that one day in the distant future someone will observe a memento or memory and think of her fondly. Donna was predeceased by her parents, sisters Betty Jeanne and Cassie Delia, half-brother US Army Colonel Emery Hyde, cherished nephew David Beery who was raised with the girls for several years when his mother died, son Steve, stepdaughter Shanna, grandson Nathan, and step-grandson George. She is survived by Matt, Charlie, Linnelle, David, Karen, many precious nieces and nephews, and six grandchildren. She will be greatly missed by her loving family and many friends. A private funeral will be held at Oak Lawn Cemetery in Corvallis. A Celebration of Life will be held at a future date.

Our beloved Donna departed this world on August 20, 2020, peacefully at home with family by her side. Donna was born in Eugene, Oregon, on November 16, 1928, the third daughter of Clarence Freeman Hyde and Nelle Florene (Beery) Hyde. The family... View Obituary & Service Information

The family of Donna Faye Brokken created this Life Tributes page to make it easy to share your memories.

Our beloved Donna departed this world on August 20, 2020, peacefully...