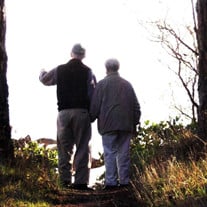 DONALD LLOYD SHRADER (February 4th, 1928 – February 8th, 2021) Donald Lloyd Shrader, 93, of Corvallis, Oregon passed away on Monday, February 8th, 2021 at Conifer House. Don was born on February 4th, 1928 to Kenneth and Ella (Olson) Shrader in the rural community of Buhl, Idaho. As a young boy Don was instilled by his parents to have a strong work ethic. These concise work ethics continued throughout his lifetime whether he was working in his dental practice, hiking a wilderness trail, landscaping his yard, helping a neighbor or barbequeing for family and friends. After graduating from high school Donald did a brief tour of duty at the end of World War II with the Occupational Forces in Japan. Upon returning to the States, he entered the pre-dentistry program at Oregon State University. After graduation he married Barbara Grace Palisch on December 27th, 1951 in Twin Falls, Idaho. They moved to St. Louis, Missouri where Don attended Washington University Dental School, graduating in 1955 with a DDS degree. Don and Barbara then moved to Corvallis, where Don joined the dental practice of his brother Ken. Don practiced dentistry in the Philomath and Corvallis area for nearly 40 years before retiring. Don was very active in the Corvallis community, particularly with the Boy Scouts Of America. He and Ken founded BSA Troop 161 in Philomath and in 1969 Don was honored with the Silver Beaver award. He enjoyed gardening, fishing, hunting, hiking and backpacking and was well known for sharing stories of his adventures on the trails of the Oregon wilderness. He was a member of the First Presbyterian Church of Corvallis and served as a Deacon. During his professional years Don was a member of the Southern Willamette Dental Society, where he was held in high esteem for his prosthetic dentistry. He and Barbara had many close friends and they often opened their home for dinner parties and celebrations. They also enjoyed road trips with friends and Don would add entertainment while driving by reciting very long and humorous poems from memory. Don is preceded in death by his wife of 68 years, Barbara, and his brother, Kenneth Warren Shrader. He is survived by his daughter Laura & son-in-law Don. According to his wishes, Don will be cremated & his ashes scattered with Barbara’s. Due to the covid pandemic there will be no services. Remembrance donations may be sent to Lumina Hospice or the First Presbyterian Church Of Corvallis/Pre-School and Day Care Center. McHenry Funeral Home is handling arrangements. Please leave condolence messages for the family at www.mchenryfuneralhome.com

The family of Donald Lloyd Shrader created this Life Tributes page to make it easy to share your memories.