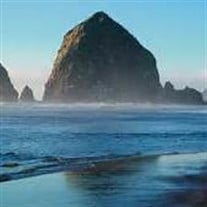 Donald Clarence Ellis, 82, passed away on January 20th, 2019 at the Regent Court Memory Care Center in Corvallis, Oregon after a long struggle with Alzheimer’s disease. He was born on January 27th, 1936 in Gernt, Tennessee to Clarence and Rheba Payne Ellis. Don grew up in Gernt, Tennessee until age 11. His father worked for the railroad and took his family with the railroad to Oregon in 1947. Don was predominately self-educated and supported his family well throughout his life. He began work as a logger and later joined the International Union of Operating Engineers, Local 701 when he began work as a crane operator in the mid 1960s for Neville Crane Service in Corvallis. When he retired at age 61 he was working for Continental Crane (formerly Coast Crane) where he worked until his retirement. Don’s life changed when he met Donna Essex in the Klickitat Valley in the Columbia River Gorge in the 1950s. They married in 1955 in White Salmon, Washington. They had six children in their ten years of marriage, Donnie Ellis, Timothy Ellis, John Ellis, Carolyn Hudson, Debby Rariden and Lori Turner. They lived most of their life together here in the Willamette Valley. He subsequently moved to Philomath, Oregon where he lived the rest of his life with Adloma “Jo” Fraley Smith Ellis and her three children Brenda Upton, Ronnie Smith, and Johnny Dean Smith. He achieved the pinnacle of his profession when he was asked to do the Keiko (the orca from “Free Willy”) crane lifts at the Oregon Coast Aquarium with Continental Crane in Newport, Oregon. Don enjoyed fishing and hunting in his free time. He was attracted to people and was a master at story telling. He appeared to have a coffee cup glued to his hand and was known to ask for “a little bit of cow” with his coffee. He could be found starting the day with his friends at a local diner, CD&J, in Philomath virtually every morning after his retirement. Don was preceded in death by his parents Clarence and Rheba Ellis, two sons, Donny and Timothy, as well as his second wife and his two brothers Ed Delk and Jim Ellis. He is survived by first wife Donna Maddux of Corvallis, Oregon, his sisters Wimpy Hultberg of Corvallis and Jeanne Needham of Pleasant Hill, Oregon and his brother Ron Ellis of Cottage Grove, Oregon. He is also survived by his remaining four children John, Carrie, Debby and Lori, multiple grandchildren and great-grandchildren as well as many nieces and nephews whom he particularly loved. A viewing will be held at McHenry Funeral Home at 206 NW 5th Street, Corvallis, Oregon from 9:00 AM until 10:30 AM February 9th with Don’s four children in attendance. A graveside service and burial will follow at Oak Lawn Memorial Park at 2245 SW Whiteside Drive, Corvallis, Oregon at noon on Saturday February 9th, 2019. A reception will follow until 4:00 PM at the Corvallis Elk’s Club 1400 NW 9th Street, Corvallis, Oregon. If we have forgotten to show our Gratitude enough for all the things you did,were thanking you now. And we are hoping you knew all along,how much you meant to us.

Donald Clarence Ellis, 82, passed away on January 20th, 2019 at the Regent Court Memory Care Center in Corvallis, Oregon after a long struggle with Alzheimer&#8217;s disease. He was born on January 27th, 1936 in Gernt, Tennessee to Clarence... View Obituary & Service Information

The family of Donald C. Ellis created this Life Tributes page to make it easy to share your memories.