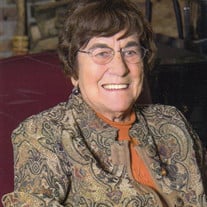 Dolores Gerding November 6, 1928 – October 4, 2020 Dolores Rae “Dolly” (Fehrenbacher) Gerding went home to the Lord on October 4, 2020. Born November 6, 1928 to Henry and Caroline Fehrenbacher in Milton, Oregon. She grew up on her Dad and Mom’s farm in Troutdale, Oregon; graduating from Corbett High School. She met her life-long soulmate and husband Henry E. “Hank” Gerding in Corvallis. Dolores and Hank were married in Corvallis on July 5, 1948, spending 51 years of loving life together before Hank passed away in 1999. She and Hank lived on a ranch southwest of Philomath, raising their six children there. On the ranch she survived Hank and the family raising cattle, hogs, chickens, and turkeys. She stayed home raising the children until they reached teenage years and then she worked at the family store, Gerding’s Grocery & Feed in Corvallis, until the store was sold in 1979. Dolly then worked at The Old World Deli in Corvallis until she retired in 1994. Dolores was a modest, talented artist who enjoyed drawing and painting, sharing her art works with family. She still drew and painted at age 91. She was a warm, loving mother, grandmother, great-grandmother, great-great-grandmother and friend. Her door was always open and over the years many, many kids would drop in and spend the night rather than risk late night on the roads. She was a beloved member of St. Mary’s Catholic Church for 72 years. Her and Hank were long-time chaperones for the Catholic Youth Organization. Dolly is survived by sons Ed (Rosie), Greg (Judy), Tim (Kelly), Terry (Yedaly), Tom (Debbie), and daughter Peggy (Frank – passed); 14 grandchildren, 17 great-grandchildren, and 3 great-great grandchildren. The family wishes a special “thank you” to the Stoney Brook Assisted Living staff and the Serenity Hospice staff. A family-private service is planned immediately and a public celebration of life will be scheduled next year when COVID permits. McHenry Funeral Home is handling the arrangements.

The family of Dolores Rae Gerding created this Life Tributes page to make it easy to share your memories.