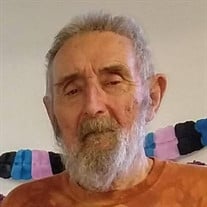 David Utt was born June 2, 1932, the firstborn son of Archie and Alma (Goff) Utt. At the time he was born, his parents operated a lunch counter, Al’s News Agency, on Monroe Street in downtown Corvallis. David graduated from Corvallis High School in 1950. By then he had 2 younger brothers, James (1938) and Michael (1947.) In the early 1950’s David served briefly in the U. S. Navy. He later moved to the Los Angeles area, where he found work as a motorcycle messenger. In 1956, David married Nancy Blodgett in Corvallis. He was on crutches at the time, the result of a serious motorcycle accident in Los Angeles. Nancy and David lived in South El Monte, California for a few years, and David worked at a factory that made mobile homes and travel trailers. They moved back to Oregon, and had 3 children, Sean (1958), Rosemarie (1959) and Lyle (1962.) All three still live in Oregon. Over the years David worked at a variety of jobs, including a motor route delivering the Oregonian, working for Foress Sign Company, and for Speed Cut, Inc. He operated mobile sound systems for events such as the Mary’s Peak Trek and Oregon State football games. Eventually he worked for a number of years as a millwright at the Country Coach motor home company in Junction City. His mother died in 1988 and His Brother James died in 2008 . After his father’s death in 1999, David inherited the family home and a few acres at the south edge of Avery Park. David and Nancy lived there until Nancy’s death in 2015. The old house was damaged beyond repair when a large oak tree was blown down on it in a 2006 storm, but the house was replaced. David continued to live on the property he and his parents had moved to in 1940, when he was about 8 year David is survived by Brother Michael, son Sean Utt daughter Rosemary Knapp and husband Jeffery Knapp, son Lyle Utt and wife Laura, 8 grandchildren 4 step-grandchildren and 5 great grandchildren 10 step great grandchildren. David passed away at Providence St. Vincent's Medical Center in Portland on Monday, August 9, 2021. A memorial service is planned for 1:00 PM Friday, September 3, 2021 at McHenry Funeral Chapel. Please leave condolence messages for the family at www.mchenryfuneralhome.com

The family of David Richard Utt created this Life Tributes page to make it easy to share your memories.