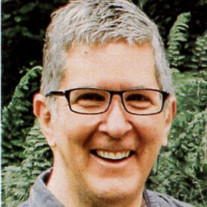 On Thursday, August 13th, 2020, David Merrill Stucki (age 51), loving husband and father of six sons passed away in the Salem, Oregon Hospital following a mountain biking accident at Black Rock on August 8th with 3 of his 6 boys. Dave was born December 3rd, 1968 in Moscow, Idaho to Gene and Marilyn Stucki. He spent the first years of his life in Springfield, Oregon and then his later adolescence in Lacy, Washington. He was married and sealed to the love of his life, Nichole Agren, on August 24th, 1991 after meeting in the A Capella choir at Rick’s College (now BYU-Idaho).They have been married for 29 years. He received associates’ degrees in electrical engineering from Ricks College, and computer science from the Community College of the Air Force. Dave served valiantly in the United States Air Force as a computer programmer at Langley Air Force Base in Hampton VA from 1994-1998. He then moved his family to Oregon and continued to work in the tech industry until his passing. Dave was a faithful member of The Church of Jesus Christ of Latter-Day Saints and had a passion for Jesus Christ and His Gospel. He served a two-year mission for the Church in Johannesburg, South Africa at the age of 19 speaking Afrikaans while learning to love and serve the people. Some of his favorite things in life were sharing the Gospel, listening to his boys sing together (and often joining them himself) with his wife at the piano, singing duets with Nichole, their weekly date nights for over 20 years and watching his children succeed. Dave is well known for his quirky sense of humor, easy laugh, and beaming smile. He loved music, politics, reading, health & fitness, and genuinely anything his family members love. Dave was personified in the strength of the relationships he fostered with others. He had a natural ability to see great value in everyone, and anyone who spent any amount of time with him felt his genuine interest in their life; a natural quality found deep in the fiber of his soul. His character reminds us of our duty to look out for, and lift up our friends and loved ones. His compassionate spirit, eagerness to serve, and authenticity will be missed by so many. Dave is survived by his wife Nichole, 6 sons, Devan (Meeja), Nathan (Macayle), Chandler (Kaelyn), Derek, Alec and Nicholas, and 4 grandchildren with 2 more on the way before the end of the year. He is also survived by his father Gene, four younger brothers Dan, Doug, Brian, and Brandon and his youngest sister Dawn. Dave was preceded in death by his mother Marilyn (2010). A memorial service was held in honor of his memory on Saturday, August 15, 2020 at the Philomath High School soccer field, where he enjoyed watching all of his boys grow up playing soccer. The family has lived in Philomath for the past 20 years. A detailed account of the events immediately following the accident, and up until his passing are documented at www.gofundme.com/f/dave-stucki-medical-fund.

The family of David Merrill Stucki created this Life Tributes page to make it easy to share your memories.