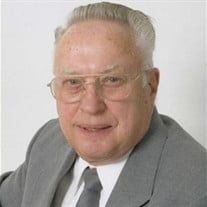 David Frederick Smith, 88, of Corvallis, died March 11, 2019, after a wonderful life as a salesman, maker, fisherman, husband, father, and friend. Dave was born June 15, 1930, in Heppner, Oregon. He was the third child of Charles Wesley Smith and Ethel Sophia Noerenberg Smith, joining sister, Patricia Jean Smith and brother, Robert Charles Smith. Brother, Gerald Martin Smith was born in 1931. The family moved to Corvallis in 1934. Although a man of few words, Dave had many often-repeating sayings — “Get your oar in the water.” “Bait the hook.” “Tell ‘em what they want to hear.” “Don’t pay anyone to do something you can do yourself.” His mantras were “work hard, play hard” and “save 25% of everything you earn.” “I’m a Beaver born, and a Beaver bred, and when I’m gone, I’ll be a Beaver dead.” According to these terms — his terms — his was a life well-lived. Dave was a self-sufficient, hard worker. His first job was at Harry Orner’s Sanitary Market. As a seven-year-old, he crawled inside the meat case and cleaned the glass. He continued there, learning butchery and proudly earning journeyman’s wages as a youth. In high school, he played football and baseball. His 16th year was a big one: he bought his first car, became a pilot and purchased his first life insurance policy. Dave landed in the hospital with a broken back after a tobogganing accident and was in a cast for many months. He graduated from Corvallis High School in 1948. A sad time in the family’s life came when brother, Bob died in World War II. Later, when applying to serve in the military, Dave was disqualified because of his previous back injury and his brother’s death. He later joined the Civil Air Patrol. Dave enrolled at Oregon State College and joined the Sigma Nu fraternity, paying his own way. He had a summer roofing business and sold Wearever aluminum pots and pans to newly engaged sorority girls, becoming one of the company’s top salesmen, ironically, as a student. He also made an infamous airplane landing in a farmer’s field after dropping “beat the Ducks” leaflets on Eugene prior to a Civil War football game. As a senior, he met Nita Lee Fitzsimmons, a newly transferred beauty from Iowa State College. After a whirlwind romance, they were engaged. Dave earned a degree in business administration and industrial engineering from Oregon State in 1952. After graduation, Aluminum Company of America (ALCOA) kept him on selling Wearever cookware in Medford. He and Nita were married October 12, 1952, in Portland. Initially, the newlyweds lived in Medford and then Oakland, California. In 1954, the couple returned to Oregon, where fishing and hunting were Dave’s favorite pastimes. Happily, he never lived anywhere else. His first job back in Corvallis was selling Sherwin-Williams paint. One day he got mad at the manager and quit. When he told Nita, she said, “You can’t quit, I’m eight weeks pregnant!” The next day Dave began working at Henderson’s Business Machines selling typewriters. Daughter, Victoria Lynn Smith was born in 1955 and son, Mark Robert Smith in 1957. In 1965, Dave founded the David F. Smith Insurance Agency. Nights were spent selling life insurance and weekends were devoted to fishing, hunting, clamming, crabbing, backpacking or camping with dear friends. Dave filled the freezer with fish, deer, pheasant, and elk he caught or shot. Over time, his book of business grew, and he and Nita began traveling around the country in their motor home. They also took many State Farm sales incentives trips abroad. Dave retired in 1990 after having built one of the largest State Farm insurance agencies in Oregon. Drawing on his engineering minor and interest in making things, Dave liked to build. And build he did – a cabin on the Alsea River with the help of brother Jerry, a home on 27th Street in Corvallis, and many wooden drift boats, specially designed for Deschutes and Alsea River steelhead fishing, for himself, his brother Jerry, and a few lucky friends, Dave was always involved in the community, serving in leadership positions with the Isaac Walton League, Masonic Lodge, Al Kader Shriners, Rotary of Greater Corvallis, Elks and many more organizations. A fixer by nature, he was frustrated by the one problem he couldn’t solve: Nita’s 12-year battle with breast cancer. Sadly, Nita died July 24, 2008, at the age of 75. The transition after Nita’s death was rough for Dave, who did not like living alone. Friend Don Mills introduced Dave to Don’s pretty, fun cousin Midge. Falling in love, and wasting no time, Dave married Mildred Adeline Benson Lewis January 3, 2010, in Kent, Washington. Midge and Dave continued living in Corvallis and spending winters in Arizona. While there in 2012, Dave was diagnosed with bladder cancer. After his surgery, Midge cared for Dave, as she did after he had a mini-stroke in 2017. Although he survived cancer, Dave never fully recovered from that stroke. He is survived by wife, Midge Smith; daughter, Vicky (Bob) Hastings; son, Mark (Fran) Smith; grandchildren, Erin Hastings, Drew (Jessica Snyder) Hastings, Palmer Smith and Bennett Smith; great-grandchild, Arlo Snyder Hastings; brother, Jerry (Charlotte) Smith; brother-in-law, Jim (Judy) Fitzsimmons; and many nieces and nephews. Sister, Pat Davis died in 2008. Dave was a remarkable, one-of-a-kind individual who made his mark on his town, family, colleagues, and friends. He is already greatly missed. A memorial service will be held at 1 p.m. on Saturday, March 30 at the First Presbyterian Church, 114 SW 8th Street in Corvallis, where Dave was a lifelong member and former trustee. A church reception will follow. No flowers for the service, please. Memorial contributions may be made to the Benton Community Foundation, 660 NW Harrison Blvd., Corvallis, OR 97330; please note David & Nita Smith Endowment Fund in the memo. Or, to Shriners Hospitals for Children – PORTLAND, 3100 SW Sam Jackson Park Drive, Portland Oregon 97239.

David Frederick Smith, 88, of Corvallis, died March 11, 2019, after a wonderful life as a salesman, maker, fisherman, husband, father, and friend. Dave was born June 15, 1930, in Heppner, Oregon. He was the third child of Charles Wesley Smith... View Obituary & Service Information

The family of David Frederick Smith created this Life Tributes page to make it easy to share your memories.