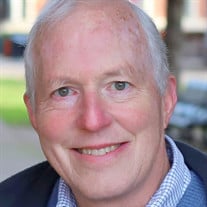 David Douglas Myrold, of Corvallis, Oregon passed on July 15, 2021. Dave was born on October 16, 1955, to Herman Myrold and Violet Tessmer in Milwaukee, Wisconsin. After graduating top of his class from high school, Dave became the first member of the Myrold family to attend and subsequently graduate from college. He began a long career in academia by first earning a B.S. in Forestry in 1977 from Michigan Technological University, an M.S. in Soil Science in 1979 from Washington State University, and his Ph.D. in Microbiology in 1984 from Michigan State University. After completing his Ph.D., Dave was hired to a teaching and researching position at Oregon State University where he remained until his retirement in 2021. Throughout his career in soil science, Dave became one of the preeminent researchers in the fields of soil biology and ecology. He attended or presented at scientific conferences or universities on each of the continents. The forty-seven graduate students he mentored spanned all corners of the globe. Dave received many awards, he was elected a Fellow by the American Association for the Advancement of Science (2020), Soil Science Society of America (2001), and American Society of Agronomy (2000). His scientific publications numbered in the hundreds. Though work was important to Dave, his family came first. In 1979, Dave married his college sweetheart, Jackie Pyper, in Salt Lake City, Utah. They had three children, Kirk, Alan, and Becky. As a father, Dave made a point to be at every game and event that his children participated in and many of the concerts his wife performed in. You could find him riding his bike to and from work every day of the year without fail. He enjoyed participating in many of the faculty/staff fitness programs at OSU and playing slow-pitch softball during the summer. Dave loved baseball, cooking and eating great food, and being with his family. Dave was also an active member of the Church of Jesus Christ of Latter-day Saints where he served in a variety of callings. Dave was a loving and knowledgeable father, husband, and friend. He was preceded in death by his parents and survived by his loving wife Jackie; sons, Kirk and Alan; daughter Becky; grandchildren Violet and Thorger; and his beloved sister Karen. A memorial service for Dave will be held on July 26, 4 pm, at 1205 NW Walnut Blvd, Corvallis, Oregon. All are invited to attend. Any donations made in David’s name should be mailed to: 1850 NW Locust Street Corvallis, Oregon 97330.

The family of David Douglas Myrold created this Life Tributes page to make it easy to share your memories.