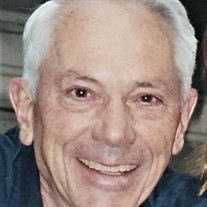 David R. Beach, Lieutenant Colonel (U.S. Army, Retired), completed life’s ultimate tour of duty on April 19, 2022. He accepted his final orders with quiet dignity surrounded by family at the Oregon Veterans’ Home in Lebanon, OR. He was preceded in death by his high school sweetheart and wife of 43 years, Sunny Lee (Thompson) Beach, of Junction City; his parents Louis M. and Verl Beach of Corvallis; his sister, Carol Beach, of Wenatchee, WA; and his granddaughter, Sarah Boykin, of Lebanon, OR. Left to cherish his memory are his four children: Sandy Strom of Cary, NC; Steve Beach (Diane) of McMinnville, OR; Shelly Boykin (Art) of Lebanon, OR; Stan Beach (Lori) of Adams, OR; six grandchildren: Tom Boykin, Marina and Annette Strom, Maverick, Katie, and Carolyn Beach; three great-grandchildren: James and Sarah Boykin, and Atlas Robertson; sister-in-law, Sue Enquist (Ray); nephews Dale and Wayne Weideman and Jeff and Dan Enquist; and 98-year-old cousin, Leah Gray. Dave was born on January 31, 1936 in Chicago, IL. He was a 1959 ROTC Distinguished Military Graduate from the University of Oregon (U of O), where he graduated with honors and was inducted into Phi Beta Kappa, the nation’s oldest and most prestigious academic honor society. Dave was commissioned a Regular Army Officer and served initially in the Infantry in West Germany. He earned a Masters of Arts in International Relations from American University and became a sub-Saharan Africa Foreign Area Officer, as well as a Military Intelligence Officer. LTC Beach particularly enjoyed his assignments to African countries as an American Embassy attaché. His diplomatic service included Vietnam, Zaire (Congo), and Malawi. He put his expertise and love of learning to use teaching courses on the government and politics of Africa with the University of Maryland and New Mexico State University, as well as serving as school board president of the American School of Kinshasa (Zaire). Dave retired in 1979 after 25 years of service grounded in selflessness, discretion, and discipline in keeping his nation’s secrets. He received many awards including the Legion of Merit, two Bronze Stars, and the Defense Meritorious Service Medal with four overseas bars. Upon his military retirement, Dave earned his Juris Doctorate from the U of O School of Law, passing the Oregon Bar on the first attempt. He embarked on simultaneous “second careers” as an attorney and gentleman farmer in Junction City, OR, where he lived for 25 years. He is the author of two books, Homegrown Hops and Let’s Grow Raspberries. When he moved to Wilsonville, OR, in 2004, he occupied his time in service to others as a docent at the Evergreen Aviation Museum and as a driver for patients of Shriner’s Children’s Hospital in Portland. Dave had a curiosity-driven nature. His lifelong pursuit of knowledge was relentless and something to emulate. He enjoyed a diverse array of hobbies including flying, photography, shooting sports, wine and beer making, growing roses and cane berries, household projects, making signature pancakes, and reading, especially National Geographic. He was remarried for a time later in his life and enjoyed traveling the world purely for leisure and educational experiences. Few who met him forgot him or his gregarious, didactic nature and extensive vocabulary. He was an enthusiastic conversationalist known for holding strong opinions and relishing in good verbal sparring – traits he passed on to his offspring, for better and for worse. Mr. Beach was a Master Mason, Shriner, Sojourner, and Knights Templar. He served as Past Master of the Fraternal Order of Ancient Free and Accepted Masons (York Rite), Corvallis Masonic Lodge #14. The pride he had in his military and other service was matched only by his great pride in and love for his family. The Beach family is profoundly grateful for the dignified and loving care and community provided by the Oregon Veterans’ Home of Lebanon in his final years. In lieu of flowers, his memory may be honored by donating to Oregon Veterans’ Homes or the Shriner’s Children’s Hospital at 3101 SW Sam Jackson Park Rd., Portland, OR 97239. He will be laid to rest on Friday, April 22, 2022 at 2pm with burial at Oaklawn Cemetery, 2245 SW Whiteside Dr., Corvallis, OR 97333. Funeral arrangements by McHenry Funeral Home.

The family of David Russell Beach created this Life Tributes page to make it easy to share your memories.