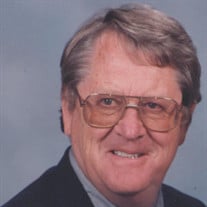 Cyril Velde Stadsvold (Cy) was born on October 20, 1932 at home at Fergus Falls, Minnesota. He died on November 29, 2021 at home in Corvallis Oregon. Cy was the son of Carl and Idella (Velde) Stadsvold. He grew up during difficult economic times. His values were formed early in life. He was very proud of his Norwegian and Lutheran heritage. He married Cynara Remboldt on June 28, 1957 in Gackle, North Dakota. Cy was known for his creativity, his out-going personality, and his sense of humor. He often entertained his children and grandchildren with drawings on napkins and with funny stories. Cy was a native of Minnesota. He earned his academic credentials at North Dakota School of Science, North Dakota State University and the University of British Columbia. He lived and worked in Fargo and Bismarck, North Dakota before moving to Corvallis in 1962. He had a lifelong love of building, art, and design. After moving to Corvallis, Cy worked for Jeppsen and Miller, before opening his own architectural office. He also worked part-time for 27 years in the Art Department at Oregon State University, teaching design and delineation. He was an avid sports fan. He belonged to Beaver Club since 1963 – attending most all of the home basketball and football games. He was a loyal “Beaver Believer”. Cy was a lifetime member of the American Architects Association (A.I.A.) serving in many capacities including two terms as chairman of the south west chapter. He conducted a regional meeting which took them from Seattle to Finland, Russia, and Denmark. A civic minded individual, Cy served on the Corvallis Arts Center board for a number of years as well as the Madison Avenue Task Force. He was on the first board directors of Grace Center for Adult Day Services and served with them for many years. Other organizations he belonged to were Rotary, Corvallis Ambassadors, Corvallis Chamber of Commerce, Children’s Farm Home Board, Primary Palette, SMART, OSU Folk Club, and Boy Scouts. He also belonged to the Portland Art Center, Friends of Gilkey, Elks, and Moose. He loved to play golf and was a member of the Corvallis Country Club. Cy won many awards for design in architecture including national awards for the Federal Building in Bismarck ND, and for the Town and Country Real Estate Building, in Corvallis OR. He won a special citation for professional excellence from the SW Chapter of the A.I.A. for the Away Travel building in Corvallis, and a National Historic Preservation Award for the Benton County Courthouse. He was a member of Grace Lutheran Church and supervised the building of the church located at Kings and Harrison. Other buildings Cy worked on include the restoration of the Polk County Courthouse, Benton Co Historical Museum, Grant Avenue Baptist Church, Nick Allen’s Men’s Clothing store, Starfish Point Condominiums in Newport, as well as numerous homes in the Corvallis area. Cy loved to paint watercolors and after he closed his architectural office in 2012, he enjoyed the freedom to paint more and travel. He was a member of the Art In The Valley cooperative gallery, serving as the chair of the board for several years. In 2000 he was named Patron of the Arts at the Celebrate Corvallis ceremony. He was preceded in death by his parents. He is survived by his wife, his brother, Byron Stadsvold, and sister, Faye Pederson; daughters, Cynthia (Wayne) Wahrmund, and Diane Stadsvold; sons, Bradford and Thor; and 7 grandchildren, Chad and Krista Washington, Amanda, Metolius, Bradford II, and Katherine Stadsvold; and Justin Stadsvold. A memorial service will take place at 10 AM, Friday, December 3 at Grace Lutheran Church, 435 NW 21st, Corvallis, OR 97330. In lieu of flowers, contributions can be sent to Grace Center for Adult Day Services. Please leave condolence messages for the family at www.mchenryfuneralhome.com

Cyril Velde Stadsvold (Cy) was born on October 20, 1932 at home at Fergus Falls, Minnesota. He died on November 29, 2021 at home in Corvallis Oregon. Cy was the son of Carl and Idella (Velde) Stadsvold. He grew up during difficult economic... View Obituary & Service Information

The family of Cyril Velde Stadsvold created this Life Tributes page to make it easy to share your memories.