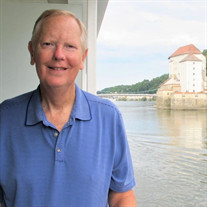 Clifford Gordon Collard, 68, of Newport, passed away on October 31st surrounded by his family, after suffering a cardiac arrest on Oct 29th. Cliff was born in Hood River, Oregon to Lillian and Charles Collard on December 20, 1951. He grew up in Tillamook with his brother Greg where he graduated from Tillamook High School in 1970 and was Valedictorian of his class. He obtained his BS in Political Science with honors from Oregon State University where he met his wife & best friend of 45 years. Carey & Cliff were married in Albany in 1975 before moving to Sacramento, CA where Cliff went to the University of the Pacific McGeorge School of Law and earned his Juris Doctorate in 1977. Cliff practiced law in Lincoln County for 40 years while he and Carey raised their two daughters. Cliff believed in being a public servant which he lived out by serving as a board member on the Economic Development Alliance of Lincoln County for many years, as well as being active in the Yaquina Bay Optimist Club and Newport Boosters. He was a member of the First Presbyterian Church of Newport where he had served as an Elder. Cliff & Carey are passionate Oregon State Beaver fans and have devoted many years cheering on their teams in Corvallis with close friends. Cliff loved sailing and being on the water. He took great pride in his yard and projects around the house and every year would delight in decorating the house & yard with hundreds of Christmas lights. In 2018 he finished a remodeling project on his house that he did mostly himself. Cliff and Carey traveled the world together as they shared a desire to see & experience other cultures and historical sights. He loved music and would often be found with his iPad enjoying music by Queen and Cat Stevens. Most of all, our Papa was a proud husband, father and grandparent and was selfless in his great love to his family and 5 grandchildren. He was known by all as being gentle and kind, with a meticulous attention to detail, passion for knowledge, and always strove to do the right thing. In addition to Carey, Cliff is survived by his brother Greg Collard; daughter & son in law Jaime & Justin Perryman and grandchildren Madison & Blake; daughter and son in law Kelly & Ryan Thomas and grandchildren Kaelyn, Nolan & Jaron; and his new Chocolate Lab puppy, Mocha. In lieu of flowers or donations, Cliff would have loved contributions be made to the Yaquina Bay Optimist Club or Newport Boosters.

Clifford Gordon Collard, 68, of Newport, passed away on October 31st surrounded by his family, after suffering a cardiac arrest on Oct 29th. Cliff was born in Hood River, Oregon to Lillian and Charles Collard on December 20, 1951. He grew up... View Obituary & Service Information

The family of Clifford Gordon Collard created this Life Tributes page to make it easy to share your memories.

Clifford Gordon Collard, 68, of Newport, passed away on October...