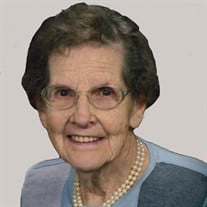 Cleda Arlene Cooper was born in 1922 in Elm Springs, Arkansas. In 1924 her parents, Alfred and Emma Cooper, and their family left Wheeler, AR and moved to Oregon, traveling cross-country in a Model “A” loaded with the family and their belongings. They arrived and settled in Lincoln County. Cleda graduated from Eddyville High School. Cleda met Calvert (CE) Jones, an eligible bachelor who was ranching at Harlan, OR. They married in 1941 and began their family which grew to include 9 sons; Irvin, Al, Don, Ron, Sam, Avery, Charlie, Bob and Calvin. The family ranched and raised cattle in Harlan until 1959 when they moved to their current farm south of Corvallis. CE, Cleda and their sons operated this diversified livestock and crop farm for over 50 years. Cleda met CE at the Big Eddy Grange and they were very active in the Willamette Grange and Oregon State Grange all of their lives, each receiving their 75 year member pins. As part of her involvement in the Grange, she organized and installed the Benton County booth, which featured the county’s agricultural production, at the Oregon State Fair for many years. Cleda worked hard at gardening, canning and cooking for her large family, which often included nieces, nephews and extended family. Adults and children alike, headed straight to her large tub of homemade cookies whenever they entered her kitchen. Cleda was accomplished at sewing and crocheting; making clothes, stuffed toys, quilts and afghans. She often made homemade gifts for her entire family for birthday and Christmas gifts. She also made many items that she donated to those in need. In 1972 she won the National Grange sewing contest. Cleda became interested in family history, and prior to the use of computers, researched and created several genealogy and history books, complete with copies of old photos, that she copied and gave to each of her children. Her family was very important to her and she took great pleasure in her 9 sons, 27 grandchildren, 20 great-grandchildren, and 3 great-great-grandchildren. She is also survived by her older brother, Gene Cooper, of Harlan, OR and 4 sisters, Emmy, Marie, Pat and Edna, all of Washington. In Cleda’s later years, she attended Alsea Christian Fellowship church with her son Bob. Cleda lived a long and full life. She died peacefully on Sept. 15th in Corvallis. A funeral service is planned for 11:00 AM, Thursday, September 23, 2021 at McHenry Funeral Chapel in Corvallis with a burial to follow at Oak Lawn Memorial Park in Corvallis. Please leave condolence messages for the family below.

Cleda Arlene Cooper was born in 1922 in Elm Springs, Arkansas. In 1924 her parents, Alfred and Emma Cooper, and their family left Wheeler, AR and moved to Oregon, traveling cross-country in a Model &#8220;A&#8221; loaded with the family and... View Obituary & Service Information

The family of Cleda Arlene Jones created this Life Tributes page to make it easy to share your memories.

Cleda Arlene Cooper was born in 1922 in Elm Springs, Arkansas....