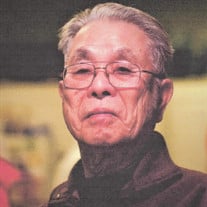 Clarence Yoshito Omoto, beloved husband, father, grandfather and friend, age 96, went home to rest in the arms of his Lord, at Good Samaritan Hospital in Corvallis, Oregon on May 2nd, 2020. He was the husband of Vitalis (Vi) Fujiko Omoto. They shared 64 years of happy and adventure filled marriage together. Born in Kainaliu, Hawaii, Clarence was the son of Yotaro and Yasu (Takayama) Omoto. He witnessed the bombing of Pearl Harbor as a young man while delivering groceries to pay his way through college at the University of Hawaii. He joined the US army serving during and after WWII in the Philippines and Japan as an Intelligence NCO 631, Tec 3, translating Japanese military documents and aiding in the reconstruction. The Military Intelligence Service (with the 442nd Regimental Combat Team and the 100th Infantry Battalion) were awarded the Congressional Medal of Honor in recognition of their exceptional service, sacrifice and loyalty to America in WWII. After his honorable discharge, Clarence attended the University of Nevada in Reno, earning a B.S. in Biology with a minor in Chemistry. After graduation he worked at Mt Zion Hospital in San Francisco as a small animal physiologist researching cholesterol metabolism for 25 years. Following his retirement from Mt Zion he spent a couple of years working in addiction research at Stanford University. When Clarence moved to San Francisco following his graduation from UN, he joined the Japanese Church of Christ (now Christ United Presbyterian Church) where he met and married his wife, Vi Miyakawa. Being the type to always lend a hand, Clarence and Vi devoted years of service to helping CUPC prosper with Clarence eventually serving as a church elder. Clarence and Vi’s lives of work, church and friends were soon enriched with the birth of their daughter, Leilani and a couple of years later, the birth of their son, Steven. Clarence volunteered with Steven’s Boy Scout Troop for nine years during which Steven achieved the rank of Eagle Scout. As the years passed Clarence and Vi put Leilani and Steven through college, Leilani and Steven got married and their four granddaughters were born! Clarence fully enjoyed his retirement, fishing, hunting mushrooms and getting his garden just the way he wanted it. In 1998 Clarence and Vi moved from San Mateo, California to Corvallis, Oregon to be near to Steven and Leilani’s families. For several years they attended NW Hills Baptist Church then moved to the First Presbyterian Church where they are still members. Clarence and Vi’s adventures included 20 years of annual trips to a Canadian fish camp, trout fishing and hunting mushrooms (especially matsutake)! Their travels have included several trips to Hawaii and Japan and cruises to the Mediterranean, Alaska and the Panama Canal. When asked what he was most proud of, Clarence replied, “My family; Lani and Ken, Steve and Lia, but most of all, my smart talented and beautiful granddaughters Jill, Kiki, Nikki and Holly.” When asked what words of wisdom he could share from what he had learned over his long, happy life Clarence replied, “Work hard, but have fun” and “Be kind and people will be kind to you.” Clarence is survived by his wife of 64 years, Vitalis Omoto, his daughter, Leilani Angers and her husband, Kenneth Angers, his son, Steven Omoto and his wife Lia Omoto and his four granddaughters, Jill Omoto, Kim Omoto, Nicole Angers and Holly Omoto. Clarence is predeceased by his parents Yotaru and Yasu (Takayama) Omoto, his brother Satoru Omoto, and his sisters Masako Kuraoka, Namiko Ota, Tsutayo Nagai, Nobuyo (Marion) Omoto, Edna (Tsuneko) Nishimura, Jean (Shimako) Nakamura, Nora (Teruko) Sato, and Yoshiko Omoto. Memorial donations in lieu of flowers may be made to First Presbyterian Church, 114 SW 8th St, Corvallis, Oregon

Clarence Yoshito Omoto, beloved husband, father, grandfather and friend, age 96, went home to rest in the arms of his Lord, at Good Samaritan Hospital in Corvallis, Oregon on May 2nd, 2020. He was the husband of Vitalis (Vi) Fujiko Omoto.... View Obituary & Service Information

The family of Clarence Yoshito Omoto created this Life Tributes page to make it easy to share your memories.