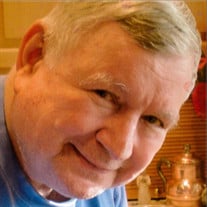 Chuck Baker passed away peacefully at his Corvallis home on December 12, 2019 with his wife Cherie by his side. Chuck was the son of Charles E. Baker and Marjorie Francis Baker, born in Medford, Oregon. He attended schools in Eugene and Salem, graduating from South Salem High School in 1961. He attended Willamette University and Oregon State University, graduating from OSU with a Bachelor’s Degree in Economics. In 1964 he married Cheryl (Cherie) Fleischmann. As a teenager, Chuck began his work career in the grocery business with being a box boy and worked his way through the ranks. Upon graduating from OSU, Chuck joined the Oregon National Guard. He trained as a medic before his honorable discharge. Continuing his career, Chuck was employed by Mayfair Markets, and became a grocery buyer in Oregon. In 1973, fulfilling a life-long desire to own his own business, Chuck purchased and operated the 26th Street ‘Superette’ Market, later starting the ‘Super Deli’. Both businesses were well-known and popular stops for the OSU Students and Community. Chuck enjoyed his businesses, which included supporting the athletic programs at OSU and Corvallis High School where his wife Cherie worked as a teacher. Chuck retired and sold the businesses in the year 2000. Throughout his life, Chuck enjoyed numerous hobbies including coin and stamp collecting. He was an avid fisherman to the extent that he handmade custom rods and salmon lures. Chuck was also a life-long Beaver Believer. In later years, Chuck came to love the challenge of playing bridge. He passionately studied the game, eventually attaining the title of Gold Life Master. Chuck also enjoyed traveling with his wife and life-long friends to various countries, but Hawaii was his favorite destination. Locally, Black Butte Ranch was a favorite destination during winter breaks, visiting and enjoying winter activities with friends. His heart always led him back to the Embarcadero in Newport, Oregon, his second home where he enjoyed fishing for salmon, entertaining friends, and generally finding peace. Chuck was blessed with a mischievous sense of humor, and a lively personality. Those who knew and associated with him were frequently entertained by his stories and general happy banter. A lover of classic rock and roll music, it was nearly impossible to be in his car without hearing the legends of that time period - trips were never dull. Chuck’s zest for life and living will be missed by all who knew and loved him. Chuck is survived by his wife Cherie, his brother Randy of Puyallup, WA and Randy’s family: sister-in-law, Nancy; nephew, Ryan; and nieces, Kelsey and Courtney. Chuck was a member of First Baptist Church of Corvallis. Services will be held at McHenry’s Funeral Home Friday, December 20th at 11:00 am, Graveside service to follow at 2 p.m. at Salt Creek cemetery. In lieu of flowers, contributions in his memory may be made to the Corvallis Dial-A-Bus. 4077 SW Research Way Corvallis, Or. 97333

Chuck Baker passed away peacefully at his Corvallis home on December 12, 2019 with his wife Cherie by his side. Chuck was the son of Charles E. Baker and Marjorie Francis Baker, born in Medford, Oregon. He attended schools in Eugene and Salem,... View Obituary & Service Information

The family of Chuck Baker created this Life Tributes page to make it easy to share your memories.

Chuck Baker passed away peacefully at his Corvallis home on December...