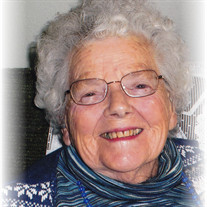 Christine Grischkowsky of Corvallis, OR, died on December 14, 2019. She was 99 years old. She was the second youngest of nine siblings who are no longer with us. She was born on August 5, 1920, in Rainier, OR, the daughter of Jens and Mary Olsen. she graduated from Rainier High School in 1938. She moved to Coos Bay in 1941 and lived with her sisters, Dagmar and Ester. She worked in the separator division of Evans Products for seven years. At Evans Products, she met and married Oscar Grischkowsky on November 8, 1946 in North Bend, OR. The couple moved to Corvallis in 1960 where her son, Thomas Dean Grischkowsky was born. The family bought a house on 29th Street near Garfield Avenue in 1970 and lived there until October 2013, when the couple moved to Timber Hill Place Assisted Living. Both Christine and Oscar enjoyed walks in the neighborhood. They became a well-known couple that have always liked people and would always stop to introduce themselves to neighbors outside in their gardens. After 35 years of doing this, they knew everyone including the children that lived nearby. They shared their garden produce and received the same from friends. They clearly shared their Christian faith and would do anything to help another in need. Many of these neighbors will meet again in heaven. Another example of Christine’s all-embracing view of God’s love was that she had written letters to her sons and grandchildren to be opened after her death. These letters speak as from one in heaven and give advice for living a life in such a way to get to heaven and take part in a joyous reunion. Christine is survived by her husband, Oscar, and two sons: Daniel in Stillwater, OK and Thomas in New York City. In addition, she is survived by three grandchildren, twins Stephanie and Timothy, and Daniela. A celebration of life ceremony will be held at 11 AM, Monday, December 23, 2019 at McHenry Funeral Home Chapel. In lieu of flowers, donations may be made to First Baptist Church of Corvallis or Lumina Hospice.

Christine Grischkowsky of Corvallis, OR, died on December 14, 2019. She was 99 years old. She was the second youngest of nine siblings who are no longer with us. She was born on August 5, 1920, in Rainier, OR, the daughter of Jens and Mary... View Obituary & Service Information

The family of Christine Hazel Grischowsky created this Life Tributes page to make it easy to share your memories.

Christine Grischkowsky of Corvallis, OR, died on December 14,...