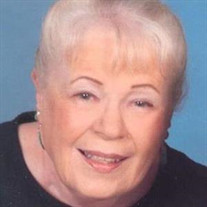 Join with us in fondly remembering Charline Thrasher Carr King, beloved sister, auntie and loving friend to all who were fortunate enough to know her. Charline, "Sharkey" to those who were close to her, led a very positive life full of service, and was devoted to her Lord and Savior Jesus Christ. She was loving, feisty, determined, giving and lots of fun. She always kept the squirrel and bird feeders, and her loved ones, filled with thoughtful treats. Her life included lots of flowers, the fellowship of friends and family, and a reputation as a generous hostess and wonderful cook. Remember a beautiful lady whose smile could light up a room and you’ve probably met her. After returning from a trip to Israel, fulfilling a lifelong dream to walk in the path of Jesus Christ, Charline succumbed to sudden illness and passed away on February 27, 2019. Charline was born in The Dalles, Oregon, on August 5, 1938, to Maxine Thelma Elliott and Charles Oliver Thrasher. She fondly reminisced about her childhood and the lovely house built by her father. After her father’s passing, her mother remarried, giving Charline a wonderful stepfather and two loving sisters, Beth and Cindy. Charline and husband Bill Carr moved to Albany where Bill took a job as Treatment Plant Operator, thus beginning Charline’s long list of local service projects for her community and for Benton County. She was instrumental in the incorporation of the City of Adair Village in 1976, taking flyers door to door and conducting homeowners’ meetings to address some of the growing issues which included street conditions, loose dogs, street lights, and the lack of funding. As a friend once put it, “All she wanted was a nice place to live. But when the streets cracked and the dogs ran in packs something had to be done.” Thirteen years after Bill’s passing, Charline married Robert (Bob) King in the backyard gazebo built for their marriage celebration by her brother-in-law, Larry Deters. Bob passed away on Thanksgiving morning in 2014, but rather than cancel holiday plans, Charline cooked a lovely dinner with the support of family and her closest friends because that is the type of person she was. Charline and a small group of investors obtained a franchise from the national Arby's corporation in 1985. They constructed what is now the Arby's Roast Beef restaurant on NW 9th Street in Corvallis. After Charline left the Benton County Commission, she and husband Bob managed the restaurant for over 10 years until it was sold back to the national Arby's corporation in the late 1990s. Charline was always full of energy and worked on an exhaustive list of projects, usually all at the same time! On August 10, 1976, Charline was elected as both the first mayor of the City of Adair Village, which made her the first female mayor in Oregon. After Charline served as Benton County Commissioner, she served many years as pro temp mayor up to the time of her passing. As mayor, Charline led negotiations with the federal General Services Administration that resulted in the city obtaining the large water system previously owned by the federal government that served the old U.S. Army’s Camp Adair military infantry training base during World War II. This included a major and valuable water right that today is still owned by the city. Charline was well known throughout Benton County as an advocate for personal property rights. She served as a Benton County Commissioner from 1979-1987, was elected to the City Council of the City of Adair Village in 2006, was a member of the Benton County Republican Women, hosted Bible study groups, and enjoyed worship at the Prince of Peace Mennonite Church in the City of Adair Village and the First Baptist Church of Independence. In 2017 Charline wrote and published a book on the history of Camp Adair and Adair Village which was published in 2017. Charline was very proud of her family and worked hard to ensure strong family ties. She is survived by her sister, Lucinda (Cindy) Tuttle; nieces, Kristin (Krissy) Mills, Amy Schotthoefer, and Sarah DeHoyos, and five great-nieces and nephews. Charline was preceded in death by husbands, Bill Carr and Bob King; her sister, Elizabeth (Beth) Deters, her dog, Jetta, and Susie, her 21-year-old cat. A service of remembrance will be held at 11 a.m., with a viewing at 10 a.m. on March 9 at the First Baptist Church in Independence, Oregon (reception following). Charline will be laid to rest near family members in a private ceremony at the Damascus Pioneer Cemetery in Damascus, Oregon, on March 15. When a summer breeze tickles the flowers, remember Charline fondly. She was a peach. Donations can be made in Charline's honor to First Baptist Church in Independence. Please send condolences to the family at www.mchenryfuneralhome.

Join with us in fondly remembering Charline Thrasher Carr King, beloved sister, auntie and loving friend to all who were fortunate enough to know her. Charline, "Sharkey" to those who were close to her, led a very positive life full of service,... View Obituary & Service Information

The family of Charline Ruth King created this Life Tributes page to make it easy to share your memories.

Join with us in fondly remembering Charline Thrasher Carr King,...