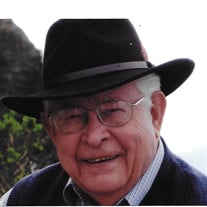 Charles Martin Simonson died at Stoneybrook Assisted Living in Corvallis Oregon surrounded by family on January 4,2020. He was born December 29, 1927 in Idaho Falls, Idaho to Henry Mateus and Sarah Rosella (Nixon) Simonson. He was a war veteran. At age 18 he joined the US Army and was part of the occupational force in Japan. After his service, while studying at Brigham Young university he met and married Betty Lou DeGraw on May 4, 1949 in Spanish Fork Idaho, a marriage that lasted for 57 years. In 1958 they moved from Idaho Falls to Portland Oregon. He worked for Baxter Auto Parts for 50 years. He was embraced by the Baxter Family who affectionately called him “Marty”. He enjoyed hunting, fishing and they traveled to England, Italy, Hawaii and many trips to Utah, Idaho and Oregon coast. Several years after he retired, they moved to Corvallis, Oregon to be near their daughters. After Betty passed in 2006, he met Terry Deis at his hospice group and they shared many wonderful times together. He was a gentle, kind and loving man. A wonderful father and husband. Of his death he wrote “it is my wish to follow the path to the end that God and and nature intended" He is survived by; daughters Deborah Ball (Peter) Corvallis and Patrice Davis(James) of Salem; brother Jerry and wife Connie Bennett of Philomath; grandchildren Crosby Ball, Stephanie Ball, Paige (O'Brien) Glennon (KJ) and Deon (O'Brien) Merten (Eric) and great grandchildren Marley, Isabelle, Elizabeth, Nicolas, Solomon, Olivia and Alexae; brother Gerald Simonson (Linda) of Rigby Idaho and a sister Mary Stoddard of Idaho Falls. He was preceded in death by his wife Betty, son Steven, son-in-law Mike O'Brien and a sister Lola Beazio. A funeral service will be held Thursday, January 23, 2020, 11 am at McHenry Funeral Home Chapel 206 NW 5th Street, Corvallis, Oregon. There is be an interment at Mountain View Cemetery in Oregon City, 11 AM, Friday, January 24, 2020. In lieu of flowers donations to Special Olympics of Benton County would be appreciated.

Charles Martin Simonson died at Stoneybrook Assisted Living in Corvallis Oregon surrounded by family on January 4,2020. He was born December 29, 1927 in Idaho Falls, Idaho to Henry Mateus and Sarah Rosella (Nixon) Simonson. He was a war... View Obituary & Service Information

The family of Charles Martin Simonson created this Life Tributes page to make it easy to share your memories.