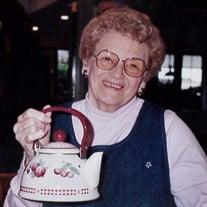 Cecilia Catherine Hansford June 9, 1923 – September 4, 2019 Cecilia Catherine Hansford, age 96, a longtime resident of the Eugene-Corvallis area, passed away peacefully on September 4, 2019 in Eugene. Cecilia known to her dear ones as Celia was born in Walnut, Kansas, the daughter of George Kasten and Louise Bindel. She spent her school years in Carlsbad, New Mexico along with her brother and sisters who enjoyed their sun-filled days often swimming together. She graduated from Carlsbad High School in 1941. During WWII, brother Lloyd joined the Navy and Celia joined the workforce as a “Rosie the Riveter” recruit. She married Montie Hansford, a native of Texas. In 1945 when the Kasten family relocated to Oregon, they followed. The two settled in Eugene and spent their years together there until his early death in 1958. She was employed by JC Penney Valley River as Office Manager until her retirement in 1985 when she moved to Corvallis to care for her mother. Strong in her faith and devoted to family throughout her lifetime she always showed love and support for her nine siblings and their many offspring. Celia reigned as the favorite aunt celebrating everyone’s birthday and special events. She enjoyed her getaways, especially Kauai sojourns and annual McKenzie River retreats with her dear friend, Ann Sullivan. She was an informed sports fan, and ardent follower of the OSU Beavers and Portland Trailblazers. Celia is preceded in death by her husband Montie Hansford and sister Irene Birkholz. She is survived by her son James Iserman of Spring, Texas who was adopted at birth and lovingly reunited with her in recent years, and also by his six children and wife Margaret. Other family members include her brother Lloyd Kasten of Corvallis, sisters Eleanor Baker and Patricia Weder of Corvallis, Mary Breitenstein of Stayton, Frances Rohner and Rosella Blye of Albany, Carole Graham and husband James of Portland, Linda Klein and husband Ronald of Redmond, 31 nieces and nephews and many more grand nieces and nephews. Her youthful spirit, kind heart and keen sense of humor will be sadly absent from their lives. Her time with us was long and filled with joy and caring. A memorial service will be held at St. Mary’s Catholic Church in Corvallis on Thursday, September 12 with a rosary beginning at 10:30 am followed by the funeral mass at 11:00 am. Donations in her honor can be made to St. Mary’s Catholic Church or Signature Hospice of Eugene in care of McHenry Funeral Home at 206 NW 5th Street, Corvallis, Oregon 97330.

The family of Cecilia Catherine Hansford created this Life Tributes page to make it easy to share your memories.