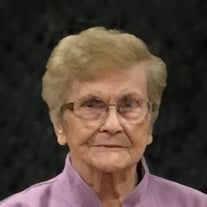 Catherine Elizabeth “Betty” Wydronek passed away April 5, 2019, in Corvallis. Betty was born on February 12, 1927, to John Leonce and Nola Hayden Brawn in Albany. She was the seventh child of 11 siblings who remained extremely close throughout their lives. She graduated from Corvallis High School and eventually went to work in the dispensary of Madigan General Hospital at Fort Lewis where she met her future husband, Edward Wydronek. They married in 1946 and were stationed in Mississippi and Michigan during Ed’s Air Force career. After Ed’s retirement from the Air Force in 1962, the family settled in Corvallis where Betty worked at the Corvallis cannery for several years until joining Hewlett-Packard in 1976 where she remained until her retirement in 1990. She enjoyed working in her garden and doing needlework in her spare time. Family was important to her and she treasured the annual week-long family camp-out as well as holiday gatherings which were usually attended by numerous members of her extended family. Betty is preceded in death by her parents; husband, Ed; grandson, Scott; and brothers, Melvin, Hayden, Everett, Leonard, William, Phillip, Paul and David. She is survived by her brother, Matthew; sister, Mary; daughter, Christine; and sons, Joseph (Lori), Timothy (Teresa) and John (Julie); as well as eight grandchildren and numerous great-grandchildren and great-great-grandchildren. Funeral services will be held at 12:30 p.m. on Monday, April 15, 2019, at McHenry Funeral Home, 206 NW 5th Street, Corvallis, with viewing one hour prior to service. Burial will follow the service at Oak Lawn Cemetery with a reception at the Suburban Christian Church, 2760 SW 53rd St., Corvallis.

Catherine Elizabeth &#8220;Betty&#8221; Wydronek passed away April 5, 2019, in Corvallis. Betty was born on February 12, 1927, to John Leonce and Nola Hayden Brawn in Albany. She was the seventh child of 11 siblings who remained extremely close... View Obituary & Service Information

The family of Catherine "Betty" Wydronek created this Life Tributes page to make it easy to share your memories.