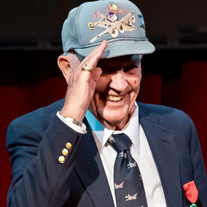 Carl H. Gustafson, dedicated family man, decorated World War II hero and passionate OSU Beavers fan, passed away peacefully at his Corvallis home on Nov. 19, at the age of 94. Humble and kind, he will be forever remembered for his compassionate, giving spirit. He truly had a heart of gold. He lived a long, stellar life, always putting his family and faith first. He created an enduring legacy while serving as husband, father, grandfather and great-grandfather. His quiet leadership was a testimony to his values. Carl set a great example for his children and extended family. They always knew they could count on him for love, humor and trusted advice. Countless times he delivered in the clutch to help solve problems. Though soft-spoken, Carl had a plus-sized personality. At family gatherings, he was a lively joker and gentle teaser. He loved to laugh until he cried. He filled a room with joy. While watching Beaver games, the competitive, prickly part of his personality popped out. He was known for blasting referees for their bad calls. A standout Oregon State baseball player in the 1940s following his military service, Carl remained a fervent Beaver believer for the rest of his life. He was an annual season-ticket holder for football, basketball and baseball, reveling in the three recent College World Series titles racked up by the baseball team. His military service marked another highlight. In October 1943, Carl, then a recent graduate of Woodburn High School, enlisted in the U.S. Army Air Corps. As a nose gunner and bombardier in a B-24 bomber, he was part of a 10-man crew that flew 27 missions as part of the Eighth Air Force’s campaign to liberate Europe during World War II. The crew remained intact through all 27 harrowing missions. In 2015, the French government awarded Carl inclusion in its Chevalier of the French Legion of Honor. On Nov. 6, 2015, the medal was awarded to him in a public ceremony at the Majestic Theatre. Carl took great pride in the medal, which he kept pinned to his shirt. He wore his B-24 hat everywhere. Carl was born in Woodburn on July 29, 1925, to Carl and Anna Elizabeth (Bomhoff) Gustafson. He had two brothers, Harold and Lyle, both deceased. At Woodburn High, Carl was a three-sport athlete and student body president. When World War II started, Carl was 17 but anxious to take part in it. He served from October 1943 until October 1945, forging tight, lasting bonds with his crewmates. In recent years, he visited with several of the remaining members of the 10-man crew. He was the last one to pass away. In 1945, Carl returned to Oregon after the war and graduated from Oregon State College, where he majored in physical education and health, joined the Delta Tau Chapter of Sigma Nu and played center field for the Beavers’ baseball team. He received offers to sign with pro teams. While proud of those invitations, he turned them down to focus on beginning a family-centered life. Carl and Betty Jean Neuman met while both attended Oregon State. They married on Aug. 20, 1949, and soon moved to Klamath Falls, where Carl worked as a coach and teacher. Later, they returned to Corvallis, where they raised a family and attended First Baptist Church. Carl worked in the painting and contracting business of his father-in-law, Marvin Neuman. He learned the business from “Marv” and eventually ran it himself. Carl maintained his ties to the Delta Tau Chapter of Sigma Nu, Oregon State, serving as its alumni treasurer for 40 years. Carl also owned and managed rental property and worked with the non-profit Collings Foundation for 25 years on their tours of vintage aircraft such as the B-24s that he flew during World War II. Carl’s wife, Betty, died in 1988. Their strong, happy marriage lasted 39 years. On March 5, 1990, Carl married Roberta Fisher Beck. For almost 30 years, they were traveling companions and enjoyed attending Beaver games, family functions, church, school reunions and other activities. During latter years, Carl was the oldest living former Beaver baseball player. He treasured his baseball seats, perched behind home plate and bearing his name. Another special tribute occurred at half-time of the Beaver football game on Oct. 29, 2016, where Carl took to the field at Reser Stadium and was honored for his four years as a baseball player from 1945-49, and for his service to our country during World War II from 1943-45. At home, sitting in the comfort of his favorite chair, Carl watched games on TV, told stories to visitors, sorted through his papers, stoked his wood stove and petted his beloved black-and-white cat, Kit-Kat. Carl kept a sharp eye on the news and was never shy when it came to voicing his opinions about politics and current events. He was an awesome story teller, sharing tales about picking cherries and berries while growing up in Woodburn, surviving flak-riddled bombing missions and crash landings in Europe, chasing down fly balls at Coleman Field, singing in the car while driving to Death Valley during family vacations, towing kids on water skis while he piloted a boat called “Gussy” around Triangle Lake, and so much more. Those stories live on, even as we miss him dearly. Carl is survived by his wife, Roberta, his four children and their spouses: Barry Gustafson (Jan), Corvallis; Rhonda Gustafson McJunkin Kirkpatrick (Steve Kirkpatrick), Eugene; Alan Gustafson (Nancy), Salem; and Greg Gustafson, Falls City; 11 grandchildren and 17 great-grandchildren. A private family graveside service will be held. A public memorial service is planned for a future date. Memorial contributions in Carl’s honor may be made to the Collings Foundation, a Massachusetts-based non-profit educational foundation, which operates one of the world’s greatest collections of historic aircraft and provides tours of vintage planes such as the B-24s that he flew in World War II. Memories, tributes or condolences can be left here on the website for the family.

Carl H. Gustafson, dedicated family man, decorated World War II hero and passionate OSU Beavers fan, passed away peacefully at his Corvallis home on Nov. 19, at the age of 94. Humble and kind, he will be forever remembered for his compassionate,... View Obituary & Service Information

The family of Carl H. Gustafson created this Life Tributes page to make it easy to share your memories.