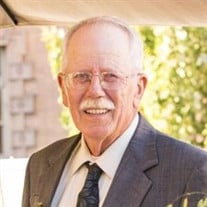 Carl “Wayne” Blasch, 76, passed away at home with family on Thursday, September 26, 2019. Carl was born December 29, 1942, in Dallas, Oregon, to Alice (Maddux) Blasch-Haling and Fred Blasch. He grew up in Philomath and graduated from Philomath High School, where he participated in track and basketball. He served on the USS Skagit during the Vietnam War and was honorably discharged in 1968. Carl became a millworker by trade and, throughout his life, he was an avid hunter and had a deep appreciation for the outdoors. He enjoyed hobbies such as stock car racing, gold panning, opal mining, and collecting historic coins. After retiring, Carl picked up metal detecting and joined the Beaver State Coin Shooters. He was awarded “treasure hunter” many times and enjoyed sharing his finds with friends and family. He was involved with Special Olympics events, bringing his equipment to teach anyone interested in learning. Later in life, fulfilling a promise to a friend, he actively collected aluminum can pull tabs for donation to benefit local dialysis patients. He is survived by his children, Lisa Blasch and Jessica Blasch; sisters, Karen Zimmerman and Carol Hamlet; brother, Allen Blasch, and granddaughter, Gillian Williams. He is preceded in death by his parents Alice Haling and Fred Blasch, and brother, Eldon. There will be a celebration of life and potluck from 2 to 5 p.m. on Saturday, October 12, 2019 at the community clubhouse (located by the post office boxes) in Summerset Village: 300 SE Goodnight Ave., Corvallis, OR 97333.

The family of Carl Wayne Blasch created this Life Tributes page to make it easy to share your memories.

Carl “Wayne” Blasch, 76, passed away at home with family on Thursday,...