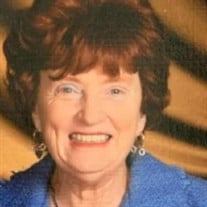 Bobbie Ruth Holsberry passed peacefully into God’s hands on May 29, 2021. She was born in Clovis, New Mexico, in 1937 to Roy and Zelda Patterson. In her early years, Bobbie was involved in 4-H, cheerleading and served as homecoming queen. Bobbie graduated from Genoa High School in Colorado and, soon after, married the love of her life, Will Holsberry. They were married for 64 years. While raising her family, Bobbie went on to earn her Bachelor’s degree in Education from Texas Tech University. She began her career as an educator in Lubbock & Argyle, Texas before moving to Oregon and earning a Masters Degree in Music Education from Oregon College of Education, graduating with honors, and continuing teaching in Corvallis, Oregon, with the 509J K-12 school district and with the music department at Oregon State University. While she followed her dream of teaching, she enriched the lives of thousands of families and children. Bobbie served in many leadership roles, including as president of the Kappa Chapter of Delta Kappa Gamma, President of the Oregon Delta Kappa Gamma, President of the Oregon Music Educators Association, the Corvallis chapter of the Oregon Education Association, and the Corvallis Education Association. While President of Delta Kappa Gamma, Bobbie visited each chapter in the State of Oregon. She was a spiritual woman and involved in many church activities. Along with her husband Will, she volunteered with the church youth program while her children were involved in it. Bobbie sang in the Corvallis First United Methodist Church for over 25 years. She also founded, directed, and performed with the Bell Choir there for more than 20 years. Bobbie & Will gained custody of a grandchild, aged 6, and raised him in their loving home until he graduated from high school. After more than 30 years of teaching, Bobbie joined Will in retirement. Never slowing down, they enjoyed golf-centered travel. She continued her love of music, supporting the Corvallis Symphony, Corvallis Youth Symphony, and volunteering to play piano and sing at the senior center and several assisted living facilities. Retirement also afforded her the time to enjoy her many grand and great-grandchildren. Bobbie is preceded in death by her parents and sisters Regina Patterson and Rita Mitchell (husband Wayne). She is survived by her husband Will, sister Carolyn Mengle (husband Lew), daughter Ellen Holsberry, daughter Nancy Beall, son Steve Holsberry (wife Janie), daughter Susan Frank (husband Mike), eight grandchildren: Brian Frank (wife Sallie), Justin Holsberry, Chris Holsberry, Andrea Finch (husband Dan), Jason Frank (wife Lindsay), Jennifer Travis (husband Doug), Vanessa Holsberry, and Derrick Beall (wife Tiffany), and ten great-grandchildren. Bobbie will be deeply missed by family, friends, and all who knew her. A funeral service will be held on Thursday, June 17th, 3:30 pm at the Corvallis First United Methodist Church at 1165 NW Monroe Corvallis, Oregon. (masks required) In lieu of flowers, the family suggests that a donation in Bobbie’s name to the Alzheimer’s Association or the Corvallis First United Methodist Church would be greatly appreciated. Alzheimer's Association donation link= https://act.alz.org/ Corvallis FUMC donation link = https://corvallisfumc.org/donate

Bobbie Ruth Holsberry passed peacefully into God&#8217;s hands on May 29, 2021. She was born in Clovis, New Mexico, in 1937 to Roy and Zelda Patterson. In her early years, Bobbie was involved in 4-H, cheerleading and served as homecoming queen.... View Obituary & Service Information

The family of Bobbie Ruth Holsberry created this Life Tributes page to make it easy to share your memories.

Bobbie Ruth Holsberry passed peacefully into God’s hands on May...