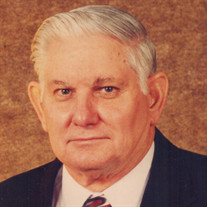 Bob Gene Rowland peacefully passed away at the age of eighty-four at home and surrounded by his loving family on November 8th, 2018. He was born in Neelyville, Missouri on February 11th, 1934 to Henry Troy Rowland and Edna Josephine Thurman and was the oldest of four children. During the second World War, the family moved to Elwood, California where Bob started grade school. The family then moved to Ventura, California where his father drove for Pacific Freight Lines. He attended Shasta High School until the tenth grade before the family once again moved in the summer of 1950 to Coquille, Oregon. At Coquille High School, he ran hurdles and played football. He was elected class president and in 1952 was offered upon graduating a football scholarship at Linfield College where he made starting lineup as a defensive halfback. He spent summers working in the local mill and also as a logger. Bob married La Verna Jean Jones in 1956 in Coquille, Oregon. They moved to Corvallis where he earned a Bachelor of Science in chemistry from Oregon State University. Bob was offered a job at Evan’s Products as the technical director, a position he held for twenty-three years. He helped develop battery separators and was highly regarded as a problem solver, traveling to the East Coast and to France. In 1975, Bob took what he referred to as a “life break” with his family and moved to Baker City, Oregon. They bought a restaurant called the Trail In*, which they the renovated and ran for seven years. He also enjoyed fishing and hunting with his family in the area surrounding Baker City. Bob and La Verna returned to Corvallis in 1983 and Bob resumed working at Evan’s Products, but being a lover of challenges, he decided to become a licensed tax consultant in 1992. He formed Advanced Business Services with his daughter Victoria and her husband William, and worked with them for fifteen years. Bob thoroughly enjoyed organizing and coordinating class reunions and would often reminisce about winning the state football championship against Marshfield. Bob loved attending his grandchildren’s sporting events and teaching them how to fish. His children have many treasured memories of all the places and things they all shared as a family. Bob is survived by his wife of sixty-two years, La Verna, and their four children, Victoria Falk of Halsey, Oregon, Sandra Smith of Penola, South Australia, Daniel Rowland of Baker City, Oregon and Mark Rowland of Shedd, Oregon as well as ten grandchildren and five great-grandchildren. He is preceded in death by his parents and sisters Martha Ann "Peggy" Miller, Patsy Williams, and Victoria S. Rowland. A celebration of life will be held on Saturday, December 1st from 2-4:00 pm at the Courtyard Marriott Hotel, 400 SW 1st Street, Corvallis, OR. In lieu of flowers, donations can be made to Boy Scout Troop 99 of Albany, c/o Lisa Freeman Treasurer, 815 Maple St SW, Albany, OR 97321.

Bob Gene Rowland peacefully passed away at the age of eighty-four at home and surrounded by his loving family on November 8th, 2018. He was born in Neelyville, Missouri on February 11th, 1934 to Henry Troy Rowland and Edna Josephine Thurman... View Obituary & Service Information

The family of Bob Gene Rowland created this Life Tributes page to make it easy to share your memories.

Bob Gene Rowland peacefully passed away at the age of eighty-four...