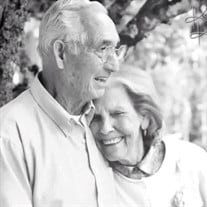 Billie J. Loftis, 89, beloved wife, family woman, and minister peacefully passed to her eternal reward on June 16, 2019 in Corvallis. Billie was born in Paris, Texas on February 19, 1930. She was raised near Hugo, Oklahoma during the Dust Bowl years of the Great Depression. Raised in extreme poverty, Billie began picking cotton with her family when it was available, learning the valuable lessons of hard work, gratitude, and thriftiness. She moved to Lebanon, Oregon in 1955 and found work in a cannery. Shortly after arriving, Billie attended a revival meeting at the Pentecostal Church of God, giving her life to Jesus Christ and answering His call into evangelistic ministry. She invested the next three years into studies and ministerial preparations and earned her first credential with PCG in 1958, eventually earning her Ordination in 1968. She met the love of her life, Charles, at a Philomath revival meeting she was leading in spring 1958. After a few nights, he finally mustered the courage to ask her out on a date. Six months later, they wedded. Ministering alongside her husband Charles, they co-pastored in Bend, OR and Boise, ID before moving back to Oregon, settling in Corvallis, where they eventually purchased a home and raised their children. After pastoring in Philomath from 1970-1974, she co-pastored New Hope Pentecostal Church of God in Corvallis for 37 years alongside her husband. An entrepreneur, Billie was the owner/operator of Billie’s Snack Bar on Van Buren Street and fondly remembered athletes from Oregon State University dropping in for milkshakes in the early 1970s. Also, she was the owner/operator of Billie’s Cafe in Philomath from the mid-1980s until the early 1990s. Her love of family and friends was unsurpassed, blessing so many with her wonderful homemade confections, baked goods, canned goods, and fruit preserves. Lessons learned early in those difficult days of life helped her succeed at everything she tried - especially her knack at finding dime-on-the-dollar bargains. With a deep commitment to her Lord, Jesus, her husband, her family, and congregants, Billie was a boundless source of wisdom and encouragement. Billie is survived by daughters DeAnne Reiman (Ed), Cottage Grove, Kaye Loftis (Roy), Sheridan, Debbie McBride (Michael), Philomath, Michelle Corley, Hendersonville, Tennessee; sons Mike (Hope), Hendersonville, Tennessee, and Chuck (Kelly), Rapid City, South Dakota, as well as 18 grandchildren, 16 great grandchildren, and several dozen nieces and nephews. She was preceded in death by her husband Charles, mother Opal Garrett, and brother Reuben Statham. A dual memorial service for Billie and Charles will be held 10:00am, Saturday, June 29 at Kings Circle Assembly of God Church, 2110 NW Circle Boulevard in Corvallis. In lieu of flowers, a memorial has been established to send students to summer camp through the auspices of New Hope Pentecostal Church of God in honor of Reverend and Mrs. Loftis’ commitment to the church’s youth ministry.

Billie J. Loftis, 89, beloved wife, family woman, and minister peacefully passed to her eternal reward on June 16, 2019 in Corvallis. Billie was born in Paris, Texas on February 19, 1930. She was raised near Hugo, Oklahoma during the Dust Bowl... View Obituary & Service Information

The family of Billie Jaunell Loftis created this Life Tributes page to make it easy to share your memories.