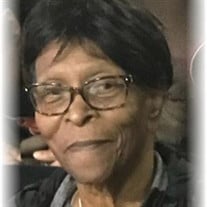 The family of Bertha L. Woods shares the loss of its guiding light and Matriarch. Bertha’s light shined brightly for 82 years. She was called to be with her Lord and Savior Jesus Christ on December 15, 2020, with her children supporting her transition home. She was born in Brady, Texas March 12, 1938 to Jack and Willie Earnest Reed. She later moved to Seaside, California where she graduated from Monterey High School in 1957. She lived in the Monterey Bay Area until 1971 when she moved to San Antonio, Texas. She always took pride in her Texas roots and was happy to be back in Texas. In 1976 she relocated to Corvallis, Oregon where she raised her family until 2015 when she relocated to Kirkland, Washington to better address her health concerns. Bertha was a believer and it is was important for her to demonstrate her commitment to those less fortunate than her. She was committed to her social causes. Her energy was directed to her church, Kings Circle Church of Corvallis, Oregon, the local NAACP Chapter and helping local families in need. She was a pioneer in helping the then local “Boys Club” transition to "The Boys and Girls Club” to ensure that young girls had a place to be active and participate in sporting activities. Most would say there was no bigger fan of Garfield Elementary School, Highland View Middle School, Corvallis High School or the University of Oregon Athletics as her children matriculated through each. The WOODS Family was well known in the local and state sports scene. For those who knew Bertha, they would define her as strong-willed, supportive, compassionate and caring to all that she met. She was willing to give you the side-eye if she thought you deserved it. Your children were her children. She loved people and she was a mentor inside and outside her family. Spending 15 years working at HP in Corvallis, she balanced work and home life issues while keeping a focus on her family and faith. As time passed and her family grew, she worked to ensure that her next generation had a solid foundation to grow from. Grandma’s house was the destination place. Each grandchild had time to experience the grandma Bertha’s way. Without a doubt grandma’s loving hand and guidance left a lasting impression upon each of her nine grandchildren. We all say they are her “dream”. Bertha was preceded in death by her parents, her sisters Berniece Welch, Audrey Colquitte, brother James Reed and her son Sean L. Woods. She is survived by her sons Michael Millegan of Kirkland, WA, Marcus Woods (Alhanna) of Happy Valley, OR, Lamont Woods (Kira) of Vancouver, WA; daughter Lareina Woods Starr (Ian) of Portland, OR; her brothers, Henry Reed of Federal Way WA and John Wayne Reed of Puyallup, WA; sister Ginger Ann Barnes of Brownwood, TX; grandchildren Whitney Millegan of Atlanta, GA, Kerhahn Woods of Portland, OR, Ajeya Woods of Malibu, CA, Maykayla Woods of Seattle, WA, Macee Woods of Chico, CA, Maya Woods of Vancouver, WA, Sean A. Woods of Albany, Or, Silas Starr of Palo Alto, CA, Mia Starr of Portland OR; several nephews (especially noted Tyrone Wright Sr., Anthony Edwards, Malcom Colquitte); and numerous nieces (especially Audra Colquitte, Dana Colquitte and Joann Black). Bertha had several friends one in particular was Kathy Sullivan of Corvallis, OR who cared and supported her. A special thank you goes to Mercy Martin at Lakeview of Kirkland who danced with her and cared for her. A special thank you also goes to Evergreen Hospice, especially Erin & Mary. As Bertha would say ”let this circle never be broken”. Public viewing and visitation for Bertha will be Monday, December 28, 2020 at McHenry Funeral Home from 1:00-3:00 PM. Funeral services will be on Tuesday, December 29, 2020 at 11:00 AM at Kings Circle Church in Corvallis with a burial following at Oak Lawn Memorial Park. In lieu of flowers the family asks that a donation be made to the Boys and Girls Club of Corvallis, 112 NW Circle Blvd, Corvallis OR 97330 or donate online at http://www.bgccorvallis.org/give. Donations should be made to the Bertha L and Sean L Woods Endowment Fund, which will be directed towards sponsoring the boys and girls who cannot afford to participate in the Club’s activities. We are grateful and thank you for helping us to honor our mother.

The family of Bertha L. Woods shares the loss of its guiding light and Matriarch. Bertha&#8217;s light shined brightly for 82 years. She was called to be with her Lord and Savior Jesus Christ on December 15, 2020, with her children supporting... View Obituary & Service Information

The family of Bertha Louise Woods created this Life Tributes page to make it easy to share your memories.

The family of Bertha L. Woods shares the loss of its guiding...