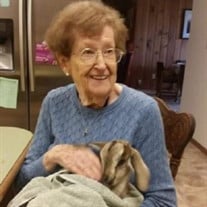 Arvella Lou Miller, 93, of Corvallis, passed away peacefully in her sleep on January 23, 2021 at the Miranda Manor Care Home in Corvallis. Arvella Lou Price Miller was born on July 30, 1927 in Rupert, West Virginia to Novella Yoakum and Oakley Price. Arvella's mother passed away during childbirth. Arvella had come into a world with the loss of her mother and only weighing 1 1/2 lbs. when she was born. At birth she had to learn to become a "fighter/survivor", she not only survived but she flourished, she was a survivor all of her life up to the day of her passing. She was raised by her paternal grandparents Rachel and Furvey Yoakum. Arvella spent her youth growing up with her grandparents in Big Mountain, West Virginia. She often told stories of her grandparents keeping her warm by placing her in a basket on the open door of the coal burning cookstove, that she was so small they could fit a tea cup over her head, and that she didn't walk until she was two and a half years old. She had one older sister and many younger half siblings who lived with her Dad down the hill from her. Arvella met Floyd Miller in Marfrance, West Virginia and later were married in Greenbrier, West Virginia in 1948 after Floyd came back from Serving in the United States Navy during World War ll. Arvella and Floyd lived in Rainelle, West Virginia for a period of time while Floyd worked as a Coal Miner and Arvella as a Homemaker. Arvella and Floyd welcomed a new baby daughter into their family on August 16, 1948 and named her Dian Lynn Miller. Shortly thereafter, wanting to find a better life for their family, they all began their trip westward all the way to Oregon. Arvella and Floyd ended up in Newport where she worked over 25 years for Safeway Supermarkets as a cashier and Floyd in the logging industry. Later they moved to Clatskanie and finally settled in Corvallis to retire where they spent 30 years on SE Goodnight Ave. Arvella was an avid gardener and was known not only for her beautiful flowers but because she and Floyd grew, dried, canned, and froze fruits and vegetables for the family and extended family to enjoy. She was also a good cook and could crochet, tat, knit, sew, and make things with what she had on hand. Arvella was preceded in death by her husband Floyd Miller in June of 2007. She spent the last five years of her life at Miranda Manor which she affectionately called home. She had several friends at the Manor that she enjoyed gardening with, working puzzles, cooking and any other thing that she could get involved with. Her family is grateful to Jennifer and everyone at Miranda Manor for taking such great care of Arvella. We'd also like to thank Dr. Cleary and Lumina Hospice. Arvella had an attitude of gratitude which made for a great life. She was a wonderful wife, mother, grandmother, great-grandmother, and friend to so many. She loved being with her family and extended family at Miranda Manor, they all loved her dearly as did countless others. This fine Lady will be greatly missed by all of those that knew her. Arvella is survived by her daughter Dian L Miller Hoffman Wright; son-in-law Fred Wright; grandchildren Erica L Hoffman Vinales, Mindy K Hoffman Hund, Jennifer J Wright Blechschmidt, and Jason Wright; great-grandchildren Cooper, Isiah, Juniper, Bailee, Lauren, Kadin and Jayda.

Arvella Lou Miller, 93, of Corvallis, passed away peacefully in her sleep on January 23, 2021 at the Miranda Manor Care Home in Corvallis. Arvella Lou Price Miller was born on July 30, 1927 in Rupert, West Virginia to Novella Yoakum and Oakley... View Obituary & Service Information

The family of Arvella Lou Miller created this Life Tributes page to make it easy to share your memories.