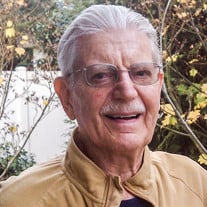 Arnold Richard Stenson, Jr. died peacefully on April 25, 2019, in Corvallis, Oregon, from complications of Parkinson’s disease. He was 84. Born in Minneapolis, Minnesota, on February 8, 1935, to Arnold Richard, Sr. and Fern Britton Stenson, he lived most of the year with his family in the suburb of Edina and enjoyed active summers of swimming and water skiing at the family cabin on Whitefish Lake, near Pine River, Minnesota. As a bright and athletic young man, Richard attended The Blake School in Minneapolis (where he was captain of the football team) and then Stanford University where he studied business. For a time after graduation, Richard worked with his father in the family business, then ultimately built his career as a certified financial planner. He and Judy Patterson raised three children in Minnesota before he moved on to Portland, Oregon, and finally Corvallis. An avid sportsman who loved to train dogs, Richard had a particular fondness for duck hunting. He spent many chilly days in Minnesota and North Dakota duck blinds with his loyal retrievers, and often shared fond memories of those times as he grew older. In later years, when he wasn’t focused on televised sporting events and impressing relatives and friends with his encyclopedic knowledge of hockey, tennis, basketball, football, and baseball, he enjoyed listening to many kinds of music. Richard is survived by sister Julie and brother Sam and their families, brother-in-law Peter Sturrock, and best friend John. He is also survived by former spouse Judy, daughter Kitty Onan, son Rick, and their families. He was preceded in death by daughter Carrie, sister Marilyn, and parents Fern and Arnold, Sr. He will be remembered by many who knew him only briefly, but caught the sparkle in his eye and warmly cared for him at the end of his life. Final arrangements will be handled by McHenry Funeral Home in Corvallis. In lieu of flowers, the family requests donations to Lumina Hospice & Palliative Care.

The family of Arnold Richard Stenson Jr. created this Life Tributes page to make it easy to share your memories.