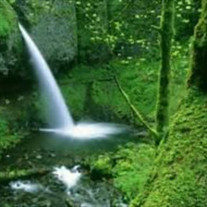 Arlene June Parker passed away of natural causes December 16, 2020 in her home at the age of 92. She was surrounded by loving family members as she was reunited with her husband in Heaven. Born in Sherwood Oregon on October 3, 1928, Arlene was the fourth of eight children to Arthur and Effie Peterson. She attended local schools and graduated from Sherwood High School. Following high school, she worked as a waitress. She met her husband, Richard (Dick) Parker at his sister’s engagement party. They were married in August 3, 1947 and made their home in Bellfountain, Oregon. Together they raised their four children while operating a logging company and maintaining a small farm. Arlene was involved in several local community groups such as the Election Board and the local 4-H group. Her faith in God was very important to her. She was an active member of Bellfountain Community Church for over 60 years where she was an integral member of the social committee, taught Sunday School, coordinated VBS for many years, and volunteered as needed. She and Dick were community minded and always willing and able to help their family, friends, and neighbors. She could often be found with extra kids at her house and regularly had a kind word with a warm smile. She enjoyed travelling, crossword puzzles, reading, and visiting with friends and family. She especially loved family reunions, the Oregon Coast, and shopping with her sister Elaine with a grandchild or two tagging along. Arlene is survived by her four children, Donna (Dennis) Brandt, Edward (Janet) Parker, Susan (Michael) Doolittle, and Betty (John) Collins, ten grandchildren, twenty two great grandchildren, and soon to be five great great grandchildren. She is also survived by two brothers and two sisters and numerous nieces and nephews. She was preceded in death by her husband Richard in 2000, her son-in-law John, parents, sister Elaine, and brothers Arthur and Kenneth. Memorial donations can be made to your local Hospice, Bellfountain Community Church, or Monroe Fire Department.

Arlene June Parker passed away of natural causes December 16, 2020 in her home at the age of 92. She was surrounded by loving family members as she was reunited with her husband in Heaven. Born in Sherwood Oregon on October 3, 1928, Arlene... View Obituary & Service Information

The family of Arlene June Parker created this Life Tributes page to make it easy to share your memories.