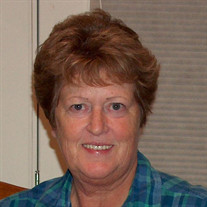 Anne Goldsmith, of Eureka, passed away on January 26, 2019, in Albany, Oregon, following a hard-fought battle with pancreatic cancer. Anne had been living with her daughter Sharon, and son-in-law Mickey, in Oregon since her cancer diagnosis in late 2017. Anne was born on October 10, 1946 to Earl W. and Goldie (Still) Davis at the old St. Joseph Hospital in Eureka. Anne attended St. Bernard's Elementary and High School, graduating Class of 1964. Over the years Anne enjoyed many interests and activities including camping, water skiing, bowling, geocaching, visiting cemeteries, road trips, and attending Oregon State University sporting events (Go Beavs!). She was an avid reader who loved a good murder mystery, but true crime was her genre of choice. For many years Anne participated in competitive shooting tournaments, and was an accomplished marksman. This talent transferred into her ability to compete with her Grandson Chris and his friends during paintball matches in which she was known for her deadeye, “Surrender or DIE”. Anne regularly donated blood and platelets at the Northern California Community Blood Bank, and was proud to have received special recognition for her fourteen gallons of blood donated. She was a lifelong animal lover, a “chocolate connoisseur”, and born perfectionist who could always find pleasure in the smallest of details … details … details. For several years Anne worked at Eureka Title Company and River City Mortgage, but the majority of her career was spent in law enforcement, and public safety. Anne worked as a police officer, and public safety dispatcher with the Eureka Police Department; in the records division of the Humboldt County Sheriff’s Office, and at her retirement in 2005 Anne was a Senior Correctional Officer with the Humboldt County Correctional Facility. Following a brief retirement period Anne went back to work for Cher-Ae Heights Casino in Trinidad as a surveillance officer until her “official” retirement in January, 2017. Anne is survived by her husband of 26 years Floyd Goldsmith; daughter Sharon Crowell (Mickey); grandson Chris Crowell; sister Marion Adams (Mike); nephews Brian Belt and Jason Belt; great-nephews Gatlin and Brayden. Stepchildren Clarence Goldsmith (Marsha), and Maria Lanham (Bob); granddaughters Cyndi Mitchell (Nathan), JoAnne Gillam and Rachael Lanham; grandson Nick Goldsmith (Alessa); great-granddaughters Amelia and Anastasia Goldsmith, and extended family members and friends. Anne was preceded in death by her parents Earl and Goldie Davis, brother Earl C. (Pug) Davis, and beloved kitty companion (and, tattoo inspiration) Maggie. Anne’s family would like to thank all who sent cards, flowers, well-wishes, and prayers during her illness. And, to Samaritan Evergreen Hospice staff in Albany who lovingly cared for Anne, and provided comfort to her family during a very difficult time. Although her stay in hospice was short, staff there shared that they enjoyed her storytelling and her fun, feisty, personality. Graveside services will be held at Ocean View Cemetery, St. Bernard’s side, on Friday April 26, 2019, 12:00 PM, followed by a reception at the Wharfinger Building in the Great Room from 1:00 to 3:00 PM. In lieu of flowers, donations in memory of Anne can be made to Sequoia Humane Society, 6073 Loma Ave, Eureka; or to Callie’s Fund by calling the Albany General Hospital Foundation, (541) 812-4705. Callie’s Fund was established in memory of one of the first therapy dogs used in hospice services.

Anne Goldsmith, of Eureka, passed away on January 26, 2019, in Albany, Oregon, following a hard-fought battle with pancreatic cancer. Anne had been living with her daughter Sharon, and son-in-law Mickey, in Oregon since her cancer diagnosis... View Obituary & Service Information

The family of Anne Elizabeth Goldsmith created this Life Tributes page to make it easy to share your memories.