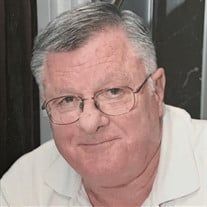 April 8, 1938 — June 19, 2019 Alan Von Nebeker, 81, passed away peacefully on June 19, 2019, with family by his side in Corvallis, which had been home since 1971. Alan was born on April 8, 1938 in Manila, Utah to Ned and Evelyn Hoskisson Nebeker. Alan spent most of his childhood on the Nebeker Ranch, located in the upper northeast corner of Utah, near Wyoming. After graduating from Murray High School in Murray, Utah, and while attending the University of Utah, where he earned his Ph.D in Aquatic Toxicology/Entomology, he met Joyce Peterson. They were married on February 19, 1960 in Salt Lake City, Utah. When he was not vacationing with his wife, there were few things he enjoyed more than tending his garden, unless it was tending his garden with his grandchildren, Cameron, Tyler, Megan and Jessica. Alan was preceded in death by his father, Ned; and his mother, Evelyn. He is survived by his wife, Joyce; his three boys and their spouses, Mark and Nancy, Robbie and Amy and Tyler; and his sister and brother, Louise (Gordon) and Glen. His life will be celebrated in services on Saturday, June 29 at the Church of Jesus Christ of Latter-day Saints, 4141 NW Harrison Blvd., Corvallis. Viewing will begin at 4:00pm and the service will start at 5:00pm. Please leave condolences for the family at www.mchenryfuneralhome.com.

The family of Alan Von Nebeker created this Life Tributes page to make it easy to share your memories.