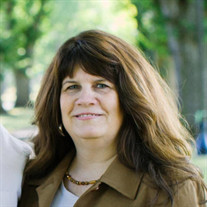 Born in Evanston, IL on Aug 29,1959, Aileen was the first of Richard and Donna Woods’s four children. She was a delightful daughter and a wonderful big sister. The family settled in Medford, where Aileen attended school, graduating from Medford Senior High School and then Southern Oregon College. She met Clark Willes in 1979 and after some time dating they married on May 1, 1981, in the Oakland temple of the Church of Jesus Christ of Latter-day Saints. A devout member of the church, Aileen performed many acts of service within her community and beyond. Aileen and Clark were a team. She helped him go through Willamette Law School and start his practice as an attorney. Later in her career, she worked as a judicial assistant to several judges, and took great pride in her work. But her great love was her family. Together, she and Clark raised three children in Corvallis: Michael, Kevan, and Jessica. Aileen was very kind and friendly to everyone, often inviting people into her home, especially having large groups of family and friends over for Sunday dinners. She and her husband also loved to travel and took many trips together. Two places that she particularly loved were Egypt and Turkey. She is survived by her husband, Clark Willes; her parents, Richard and Donna Woods; her three children, Michael (Natalie) Willes, Kevan (Krislyn) Willes, and Jessica (Patrick) Beesley; her siblings: Karen Cooper, Paul (Suzanne) Woods, Rachel (Sean) Eckton, and 6 grandchildren: Olive, Milo, Harper, Reginald, Clementine, and Marshall. She was preceded in death by her brother-in-law William Cooper. She is truly missed now, but we have faith that we will be reunited as a family.

Born in Evanston, IL on Aug 29,1959, Aileen was the first of Richard and Donna Woods&#8217;s four children. She was a delightful daughter and a wonderful big sister. The family settled in Medford, where Aileen attended school, graduating from... View Obituary & Service Information

The family of Aileen Willes created this Life Tributes page to make it easy to share your memories.